An overview of Vortex OpenSplice Launcher, how to use, configure and more.

The tools tab provides easy access to all of the tools bundled with Vortex OpenSplice. 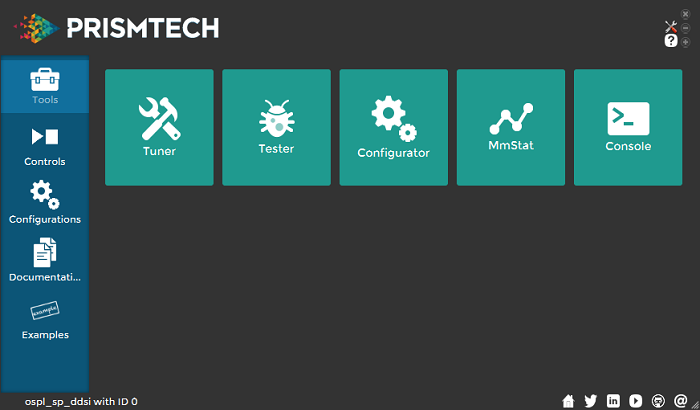 The controls tab provides the ability to control and interact with Vortex OpenSplice. 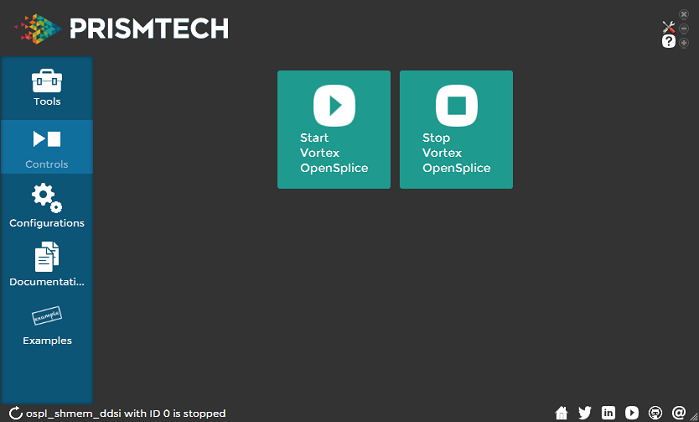 The control buttons are enabled if the active configuration is a shared memory deployment. Otherwise, they are disabled.

Once the Launcher has completed the control’s execution, a notification popup message is displayed indicating its result. The status of the Vortex OpenSplice instance is updated in the bottom toolbar to indicate that it is running. 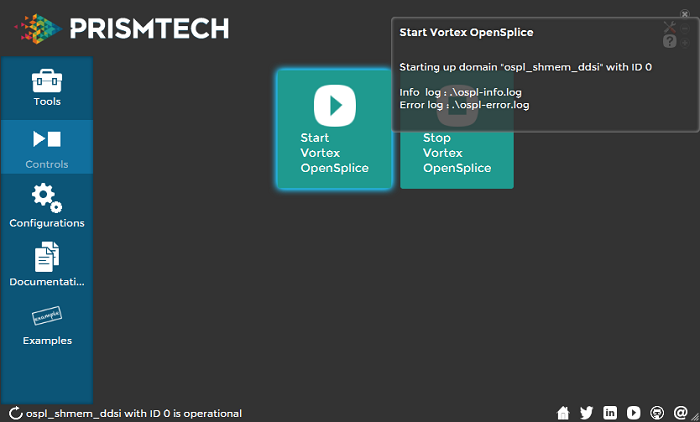 Once the Launcher has completed the control’s execution, a notification popup message is displayed indicating its result. The status of the Vortex OpenSplice instance is updated in the bottom toolbar to indicate that it has been successfully stopped. 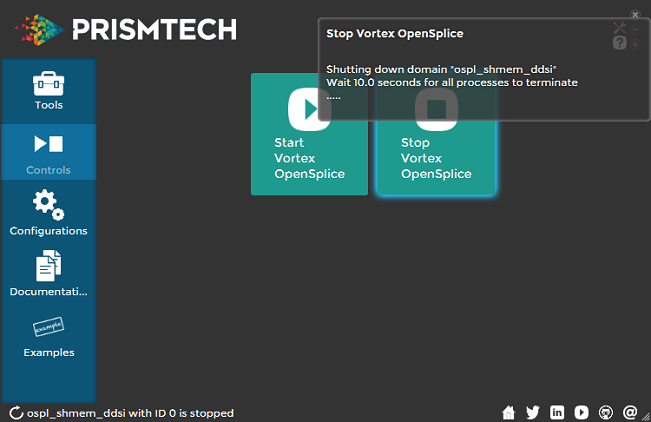 If the user tries to start another Vortex OpenSplice instance with the same active configuration, Launcher will display a notification popup message indicating that the instance is already running.
If the user wants to run two instances of Vortex OpenSplice, they must have different domain names and different domain ids in order to be successfully started by Launcher. 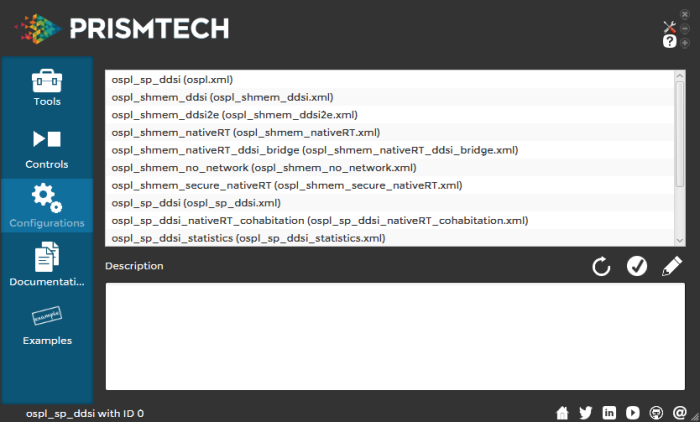 Pressing the Refresh button refreshes the configurations list with the contents of OSPL_URI, OSPL_HOME\etc\config directory, and user specified configurations directory.
Duplicates are removed if they exist in more than one of these locations. 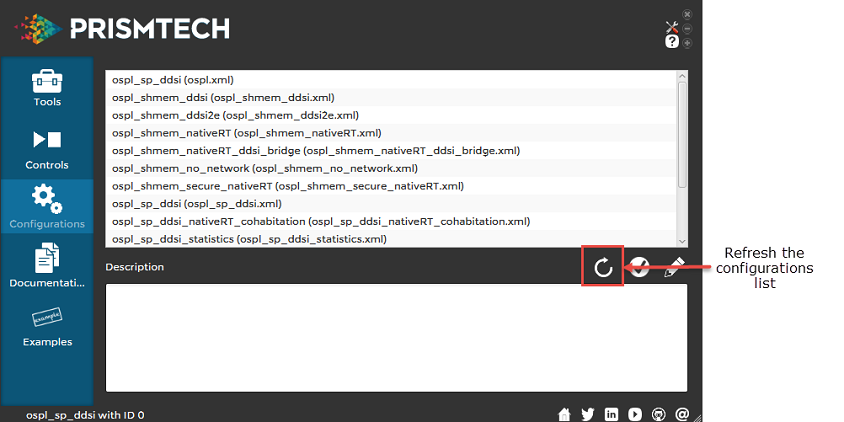 Note: If Vortex OpenSplice’s installation directory is write-protected, the tool will need to be run with elevated permissions in order to save modifications made to the default configuration files
found in OSPL_HOME\etc\config. The same applies to user-specified configuration directories. 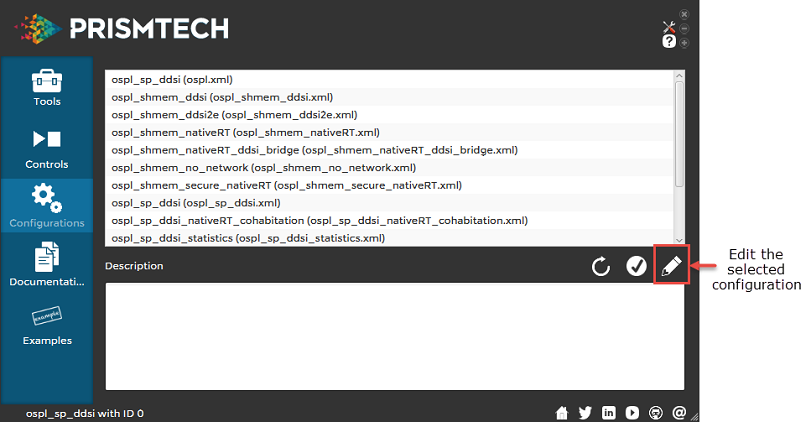 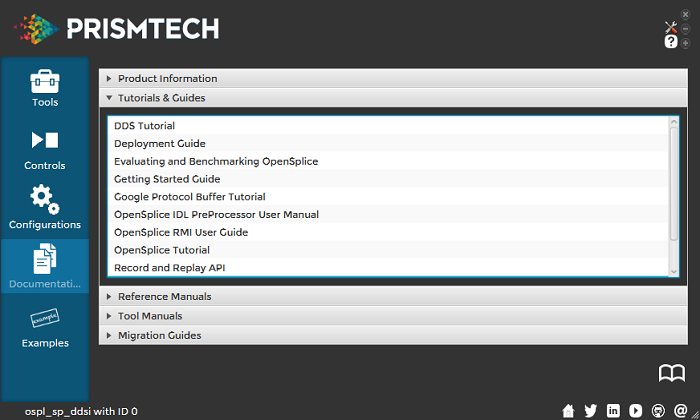 Note: If Vortex OpenSplice is installed in a write-protected directory, the application will need to be run with elevated permissions in order to build the examples. 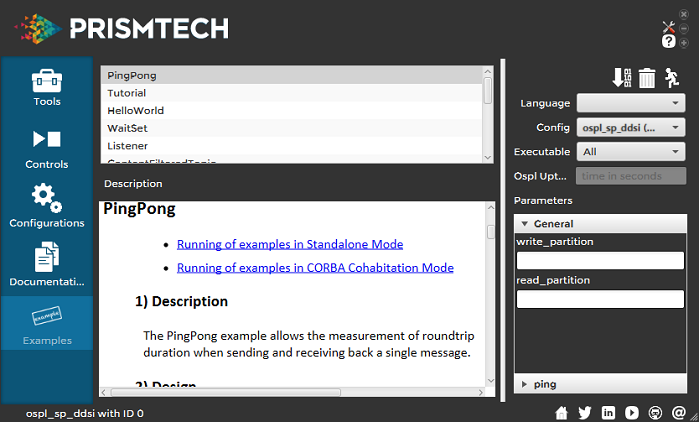 Clicking on the Build icon will compile the example for the language that is selected in the language drop-down box. A command prompt or terminal will open showing the progress and result of compiling the example.

Launcher expects that the toolchain required to build the example for the chosen language are available in the environment of Launcher. For example, to build with Visual Studio this may require running vcvarsall.bat. However, the Visual Studio VCINSTALLDIR environment variable can be specified in the Environment Variables tab in the Settings pane.
Compiling Java will require that JAVA_JDK_HOME\bin be found on the path. 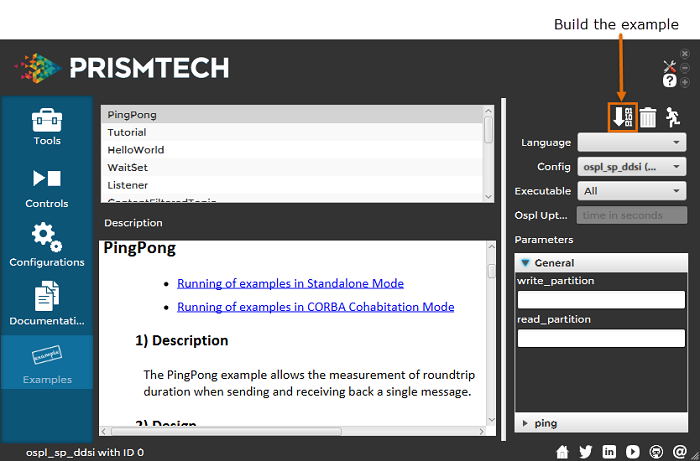 Clicking on the Clean icon will remove all the artifacts created by building the example for language that is selected in the language drop-down box. 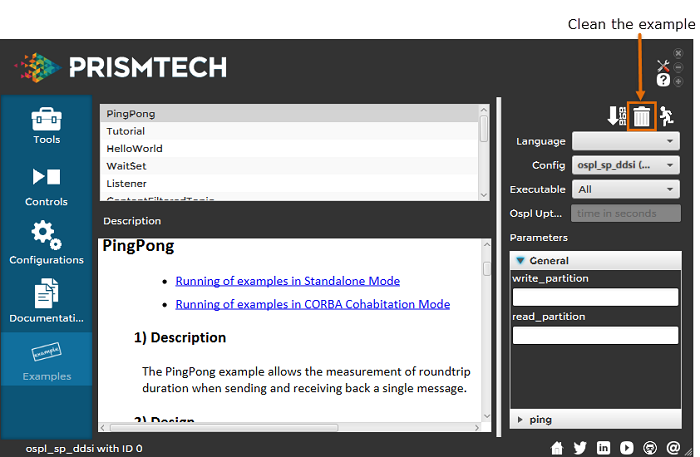 Clicking on the Run icon will execute the executables that resulted from building the example for the language that is selected in the language drop-down box. A command prompt or terminal
will open for each executable showing the output produced by that executable. If running Java executables, JAVA_HOME is expected to be available in Launcher’s environment path.

Some examples have more than one executable. The Executable drop-down box allows the user to select All or a specific executable to run. This would allow for running one
of the examples across the network by using Launcher to start the executables on different computers.

If running an executable with a shared memory configuration and there is no ospl instance running with that configuration, an OSPL instance will be launched with it. The uptime in seconds of the
Splice Daemon before it will shutdown automatically can be specified in the Ospl Uptime field. By default, all examples will have a minimum of 10s uptime. A longer or equal time can be
specified, but not shorter. If a single process configuration is selected, the field is disabled.

The Parameters section lists all of the command line parameters that can be passed to the executables when they are run. Hovering over the parameter will display
information on what the parameter is used for. 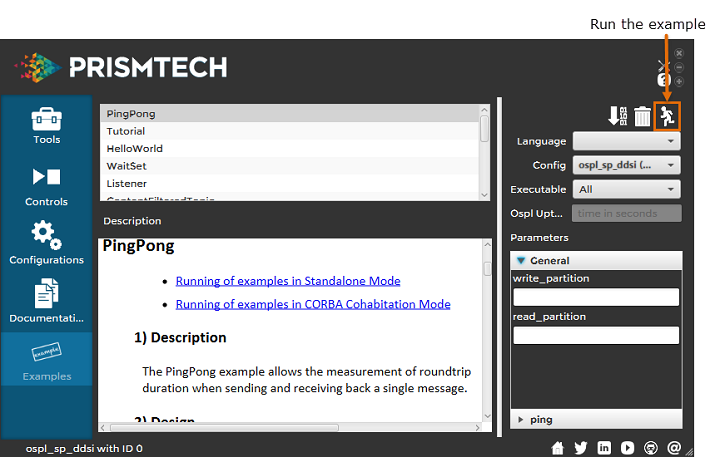 On Microsoft Windows platforms, users have the ability to open the example solution files for the Vortex OpenSplice examples in order to inspect and build them.

Prior to Vortex OpenSplice 6.6.3, these were available to users from the Start Menu in Windows. 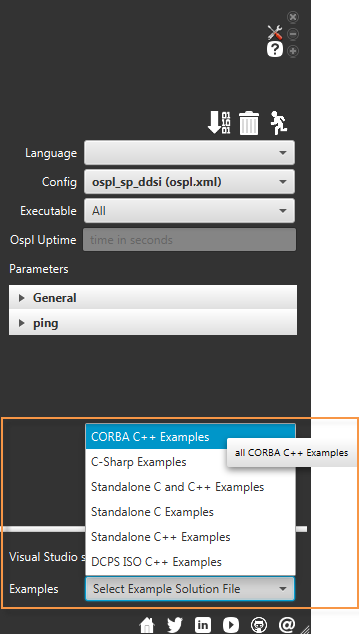 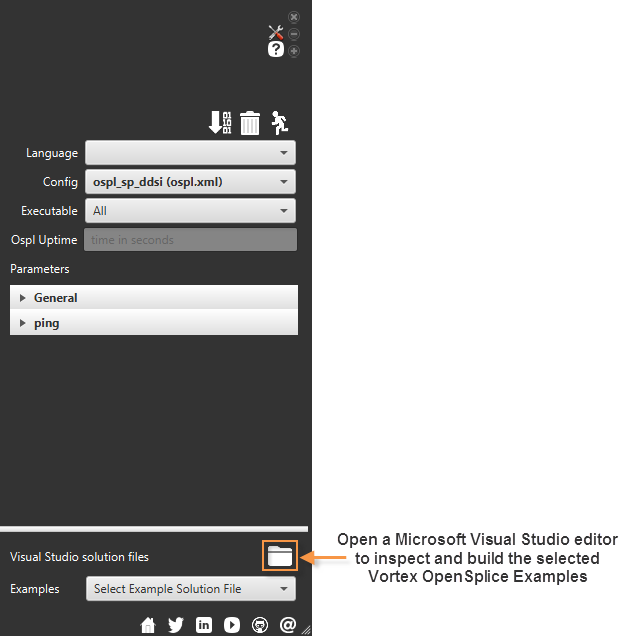 The version of Microsoft Visual Studio that is used to open the example solution files is used by either inferring from the VCINSTALLDIR environment variable or by looking in the PATH to see if devenv.exe is found. If the executable cannot be found in either locations, a notification will pop up instructing the user to set the appropriate environment variables.

Starting Launcher from the start menu or from a terminal with the OSPL_HOME environment variable set will identify the name, date, and version of Vortex OpenSplice being used to populate the
content of Launcher. 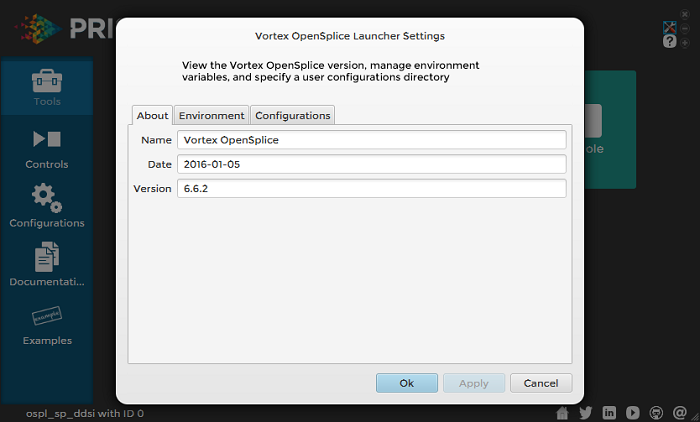 Setting environment variables in this tab allows the user to quickly customize their environment.
Overriding any settings will make it available to all the tools which are used by Launcher.
Specifying the VCINSTALLDIR allows the user to build against a specific version of Visual Studio to run the examples without having to migrate the solution files.
Changes to the URI will trigger a refresh of the configurations list in the Configurations tab. 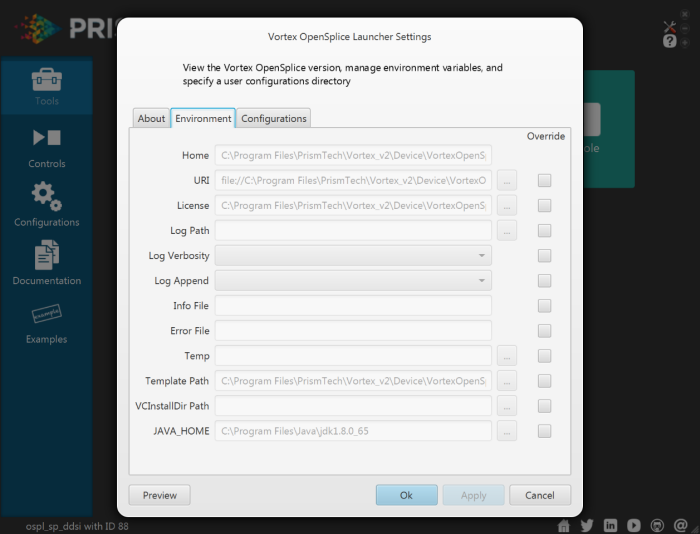 To preview the environment variable settings, select the Preview button. 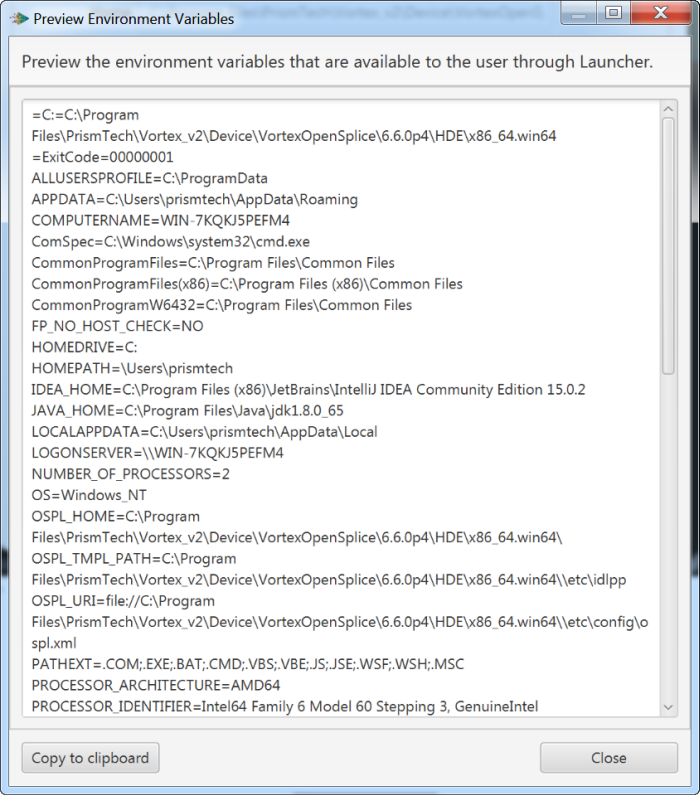 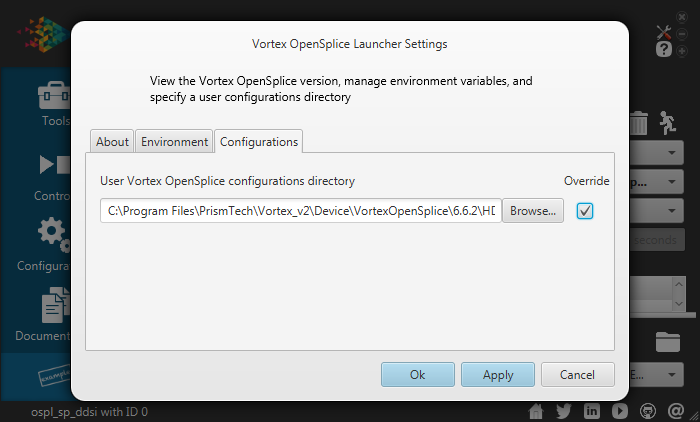 The OSPL Launcher tool is not supported on the following systems:

The following tools are required to run OSPL Launcher: