This introduction to DDS security looks at why we need a security standard in the Data Distribution Service (DDS)  and gives an overview of its use.

What prompted the need for the DSS Security standard?

Many of Internet of Things systems are being built using DDS. These systems need to secure their data exchange, especially when data is sensitive. However, prior to the DDS Security standard, there was no multi-vendor interoperable mechanism for DDS applications to communicate securely.

Prior to the DDS Security

DDS Security overcomes these limitations. Most importantly, it is standard and interoperable.

In order to understand some of the specific threats impacting applications that use DDS and DDS Interoperability Wire Protocol (RTPS), let introduce two imaginary friends, Alice and Bob.  They wish to communicate with each other and with other existing users in the network.

As shown in the following figure, there are several threats that can occur if there is no DDS security.

Constraints of the DomainParticipant BuiltinTopicKey_t (GUID)

Based on the threats described above, the DDS security specification defines five Service Plugin Interfaces (SPIs) that when combined together provide Information Assurance to DDS systems:

DDS Security specification models these plugins in the following architecture: 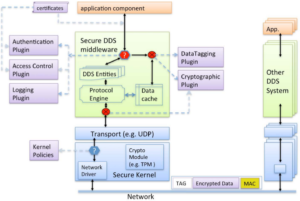